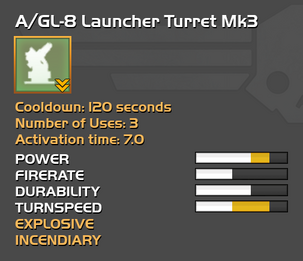 "The A/GL-8 Launcher Turret is the latest development in automated sentry technology. Launching the same rounds as the Obliterator, it has immense firepower and shoots over obstacles. Meant for fixed position defense, a variable firing range was not deemed necessary during development. The turret can discern friend from foe, but watch out for the blast radius."
- Armory Description

The A/GL-8 Launcher Turret is granted to the player as a reward for completing all the missions on its associated planet (typically a high level planet - difficulty 10 to 11).