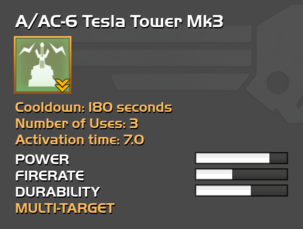 "A powerful turret that builds an electric charge when a target comes close and unloads a powerful lightning strike onto it after a short while. The automated tower is NOT capable of discerning friend from foe."
- Armory Description

The A/AC-6 Tesla Tower is granted to the player as a reward for completing all the missions on its associated planet (typically a high level planet - difficulty 10 to 11).