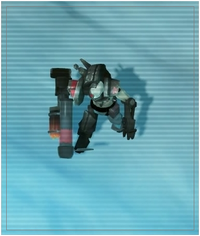 This soldier type is often the commander of patrol squads, using their grenade launcher arm to fire alarm flares and to rain high explosive death on their foes.